Welcome back to a new statistical analysis. Today we leave the old continent and travel to the States. Yes, today we are talking about NBA and, more precisely, corner 3.

The triple from the corners has always been a 3-point shot strongly desired by the attacks. This is because it is the 3-point shot nearest to the rim. The difference between the distances from the arch and from the corners to the basket in Europe is just 10/15 cm, but in NBA it assumes high value: in fact, the arch is placed at 7.24m from the rim, while the two lines delimit the corner area are at 6.71m. A difference about half meter, which leads to a preference for those sectors.

The direct consequence is that the defenses work constantly to limit this shot. In the last seasons, there is even a tendency to extremize the close-out on some players to force them to dribble. The defender that makes these close-outs usually loses again the opponent, but there is the preference to take a long-2 rather than a corner 3. They do not do it with any opponent, but still makes the idea of how this type of 3-point shot is feared and respected, especially if taken by reliable shooters.

The question then is: how has the use of this shot evolved over the last few seasons? Let's start from a graph that shows us the trend of the shots taken from the 96/97 season to today: 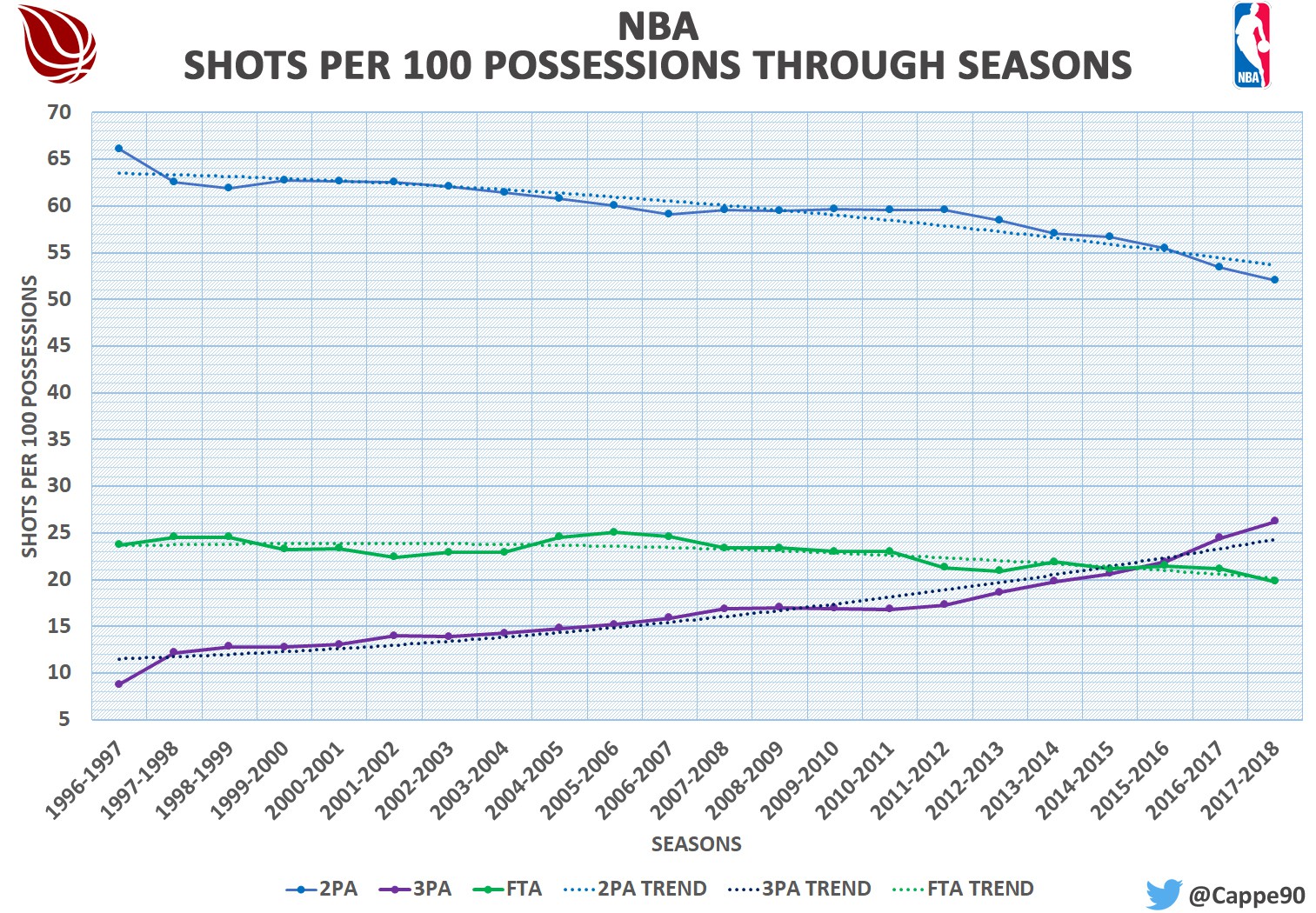 Compared to Europe, there is some small difference, but this is a graph that we expected exactly like this: progressive decrease of 2-point shots and free throws (less accentuated), instead of an increase of 3-point shots attempted.

Nothing new. Now that we know with certainty that the use of the 3-point shot also grew in the NBA, let's go deeper into the discussion.

As you know the NBA detects the shots taken and divides them into specific areas: through this division, it is possible to analyze the shooting tendency even better.

The zones are as follows:

A - Restricted area: this is the area inside the restricted arc. Therefore, lay-ups and dunks are counted;

B - In the paint: shots taken inside the area;

C - Mid-range: shots taken from outside the area, but inside the arc. In this area are counted the famous long-2;

D - Corner 3: the shots taken in the side areas beyond the 3-point line;

E - Above the break: shots taken from beyond the arc;

To better understand, I leave a summary image of the areas: 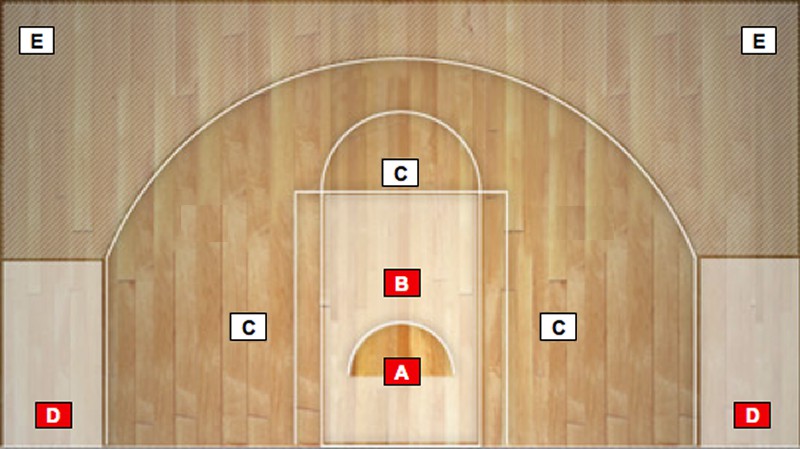 Knowing these zones, let’s observe the next graph: 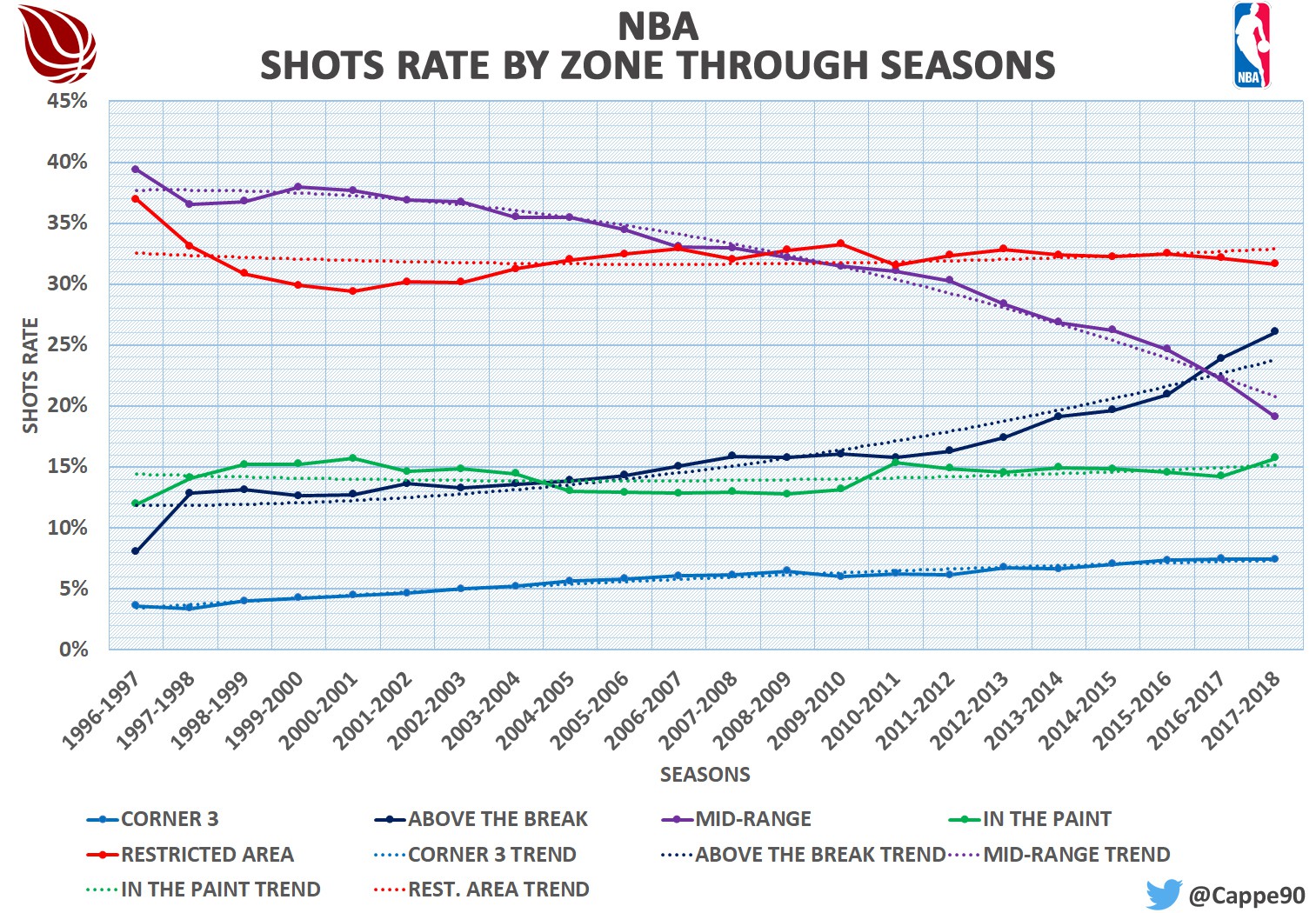 Oh, mid-range, you have suffered a total collapse: once it was one of the favorite shots, but now it is one of the least shots attempted. However, the remaining types of 2-point shots endured unchanged. The corner 3 has grown slightly and has doubled its value; last, the shots "above the break" are risen over 25%, starting from a value of 8%.

Between ‘90 and today, there is a difference: once the most used shots were near the rim and the mid-range; today, instead, 3-point shots are preferred than mid-range.

However, analyzing only the 3-point shots data create a bizarre situation; in fact, we obtain those tendencies: 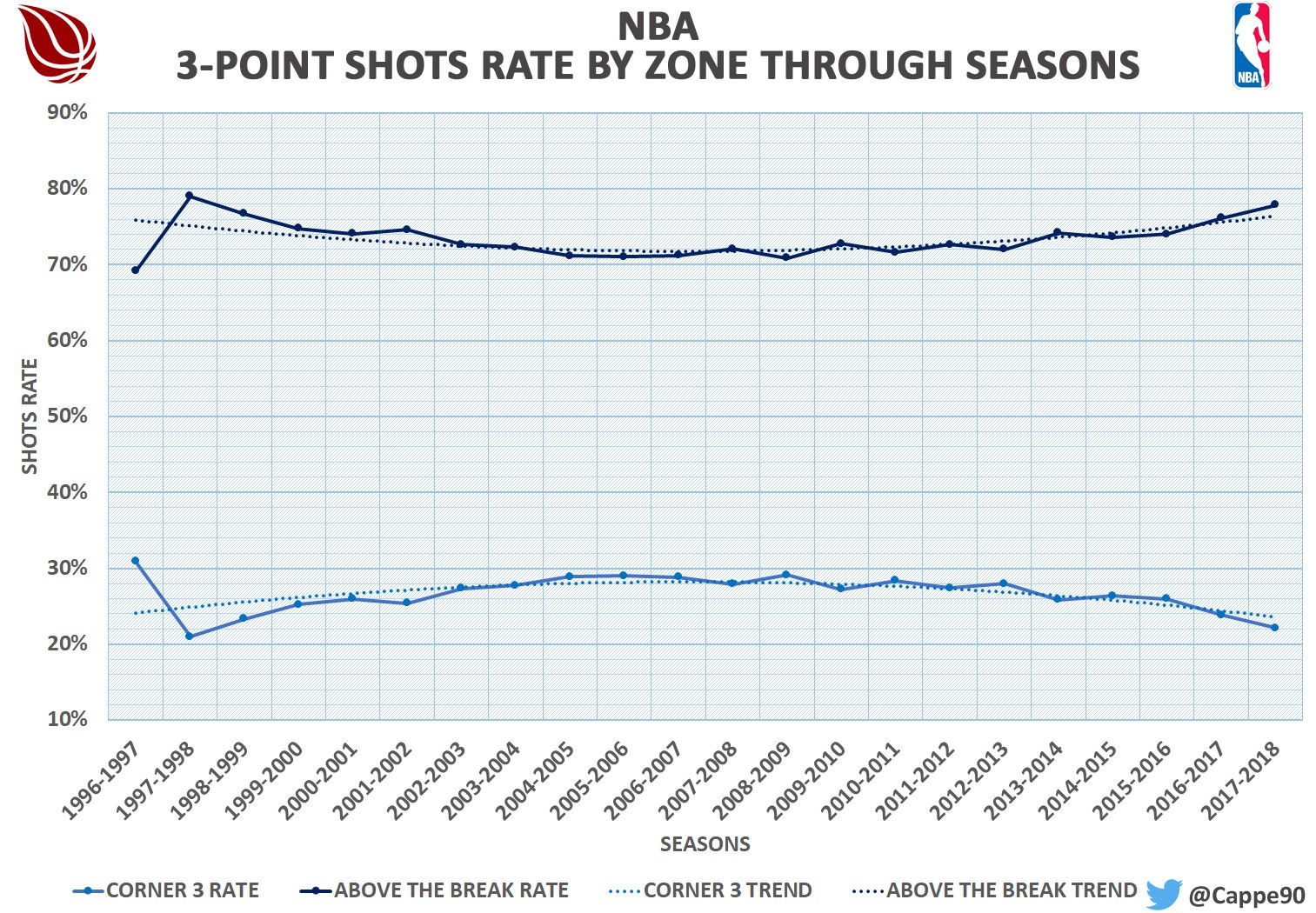 When compared to all types of shooting, the corner 3 has increased, but if it compared to the number of total triples attemptedhas decreased over the last few seasons.

There are several factors that explain the contemporary veracity of these two trends: as we have seen, in the '90 the shots from beyond the arc were not widely used. The advent of shooters has influenced the change of the game and consequently has led to a more and more assiduous search for this type of shot.

Shooters have also changed: if before their job was just to do catch-and-shoot, now it is quite normal that they do not just perform this technique. There are still pure specialists, such as Korver, who averages some percentages in catch-and-shoot and others in pull-up shots, but there are also shooters like Curry, deadly even with pull-up shots.

Thanks to the trackers used in the NBA we can discover that the 3-point pull-up shots attempted have increased from 6% to 9% in the last five seasons! This trend is not very reliable because it is based on a restricted sample, but in my opinion, it gives a clear indication of one of the reasons behind these trends.

Once, the 3-point shots were not so used and most of those attempted were catch-and-shoot. However, the entry of players like Harden or Curry led to an ever-increasing use of the 3-point shot.

It is easier to create a pull-up shot beyond the arc than in thecorners because you have simply more space: this is the key to everything. The rising of “above the break” shots is both influenced by the coach's desire to seek more 3-point shots and also by the presence of isolations and pull-up shooters able to make them with good percentages. The corners 3 instead have doubled their frequency compared to all the shots from the court, but it cannot match with the other type of 3-point shots because in that areas it is difficult to create a pull-up shot. In addition, they are also influenced by the defenses that try not to allow that type of shooting to the opponent.

Therefore, the shots from the corner remain a type of shooting searched constantly because it is profitable, but it is clear that you have to use some plays in order to create the space for the shooter; on the other side, we have a 3-point shot that is slowly turning into a normal mid-range shot, which can then be taken after a dribble or after a catch without altering its effectiveness too much.

Surely, there will be other influences that have led to these trends, but I assume these are the most crucial.