Welcome back to a new statistical analysis. Last week we discovered the trend of some numbers related to Euroleague: today we are going to do a similar analysis, but we are going to add the Eurocup too. In this way, we will also be able to have a comparison between the two competitions with an initial consideration. Although the calculated statistics are based on different samples (the number of teams and matches played), the difference is not so high to prevent a comparison.

Let's start with a comparison of the Ratings during the last seasons: "Rating" means the average of all the Offensive Rating of the teams. In other words, it is the average level of efficiency of the league. 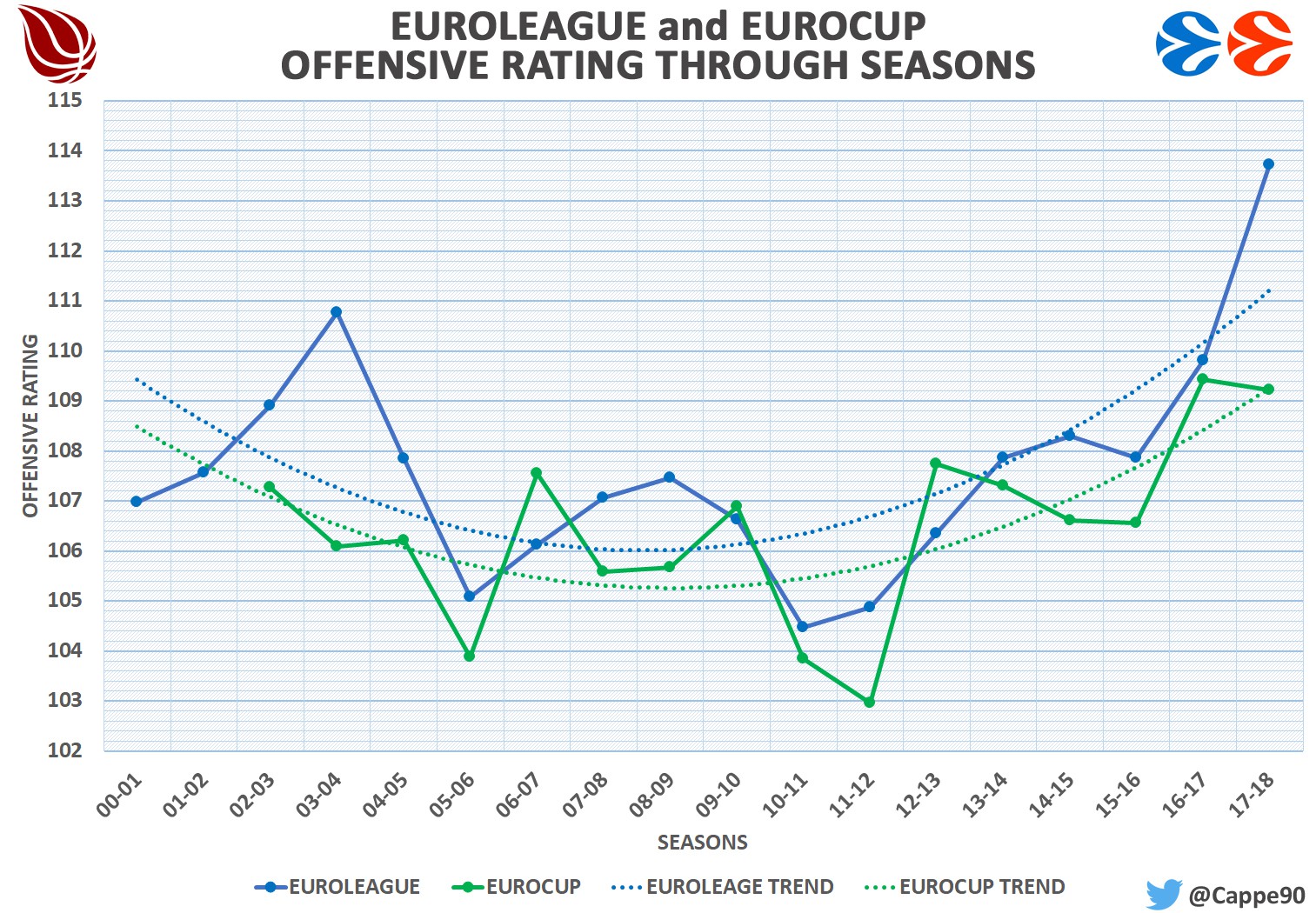 Euroleague, as expected, has an average efficiency higher than its younger sister; however, we note some years in which there was an inversion (for example the 2006/2007 season).

Leaving aside the comparison on the single season, it is certainly more interesting to see how the two trend curves are quite similar (almost parallel): this shows that the global trend is the same, although they are two different leagues with different teams and players. In other words, despite the many differences, both leagues try to play in the same way: the variety of players, coaches or teams is influenced by the historical period in which they are playing.

This is an aspect emphasized very often, but it is clear in the graph: for example, if in a historical period 3-point shots are the most used conclusion, this use can be found almost everywhere. This is a known fact, but it is always a pleasure to find the statistical confirmation. The similarity of the two trends will be also found in almost every other chart in this article.

Generally speaking, we note an initial decrease in the league Ratings, which reaches the minimum peak around the seasons 08/09 and 09/10; after that, there is a return to higher levels. In particular, the last two seasons show how the work of Euroleague has provided the highest possible levels of competition: for both tournaments, the last two years have averaged the highest values of the period under analysis.

Another very valid data is Pace: 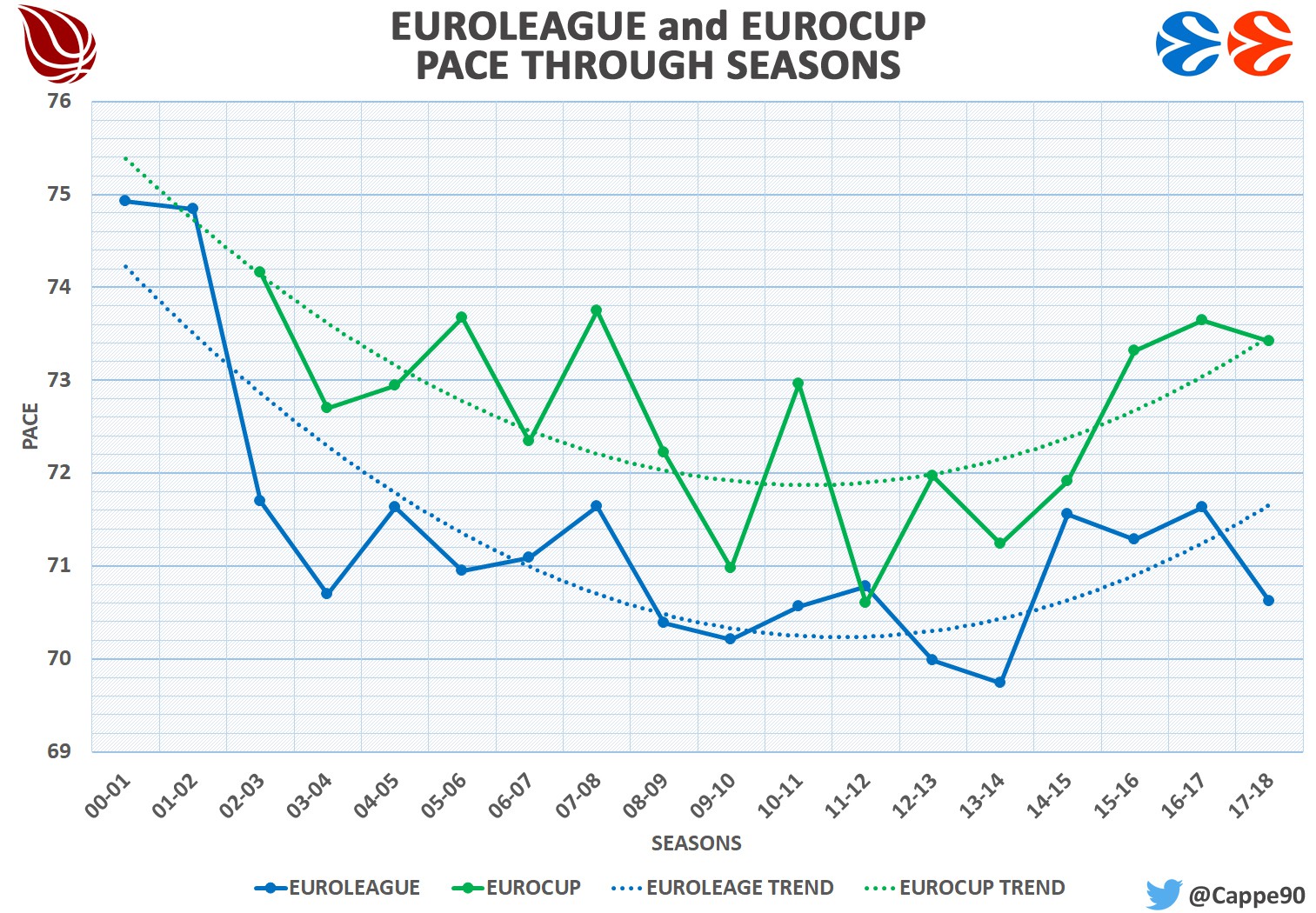 Same trend, but different average speeds. In this case, it is the Eurocup that averages the highest values. Knowing the average Rating and Pace, we can hypothesize some theories: in Euroleague the tendency is to run less but to score more, or to run less and at the same time to lose fewer balls, or, even more, a mix of these two theories.

In order to find out a statistical confirmation, I have analyzed the individual terms that make up the Pace: shot attempted, offensive rebounds and turnovers. I report below the graphs of the data that I consider most significant in defining the differences highlighted.

First, it is useful to compare the True Shooting Percentages, in order to observe the overall shooting percentages of the two leagues: 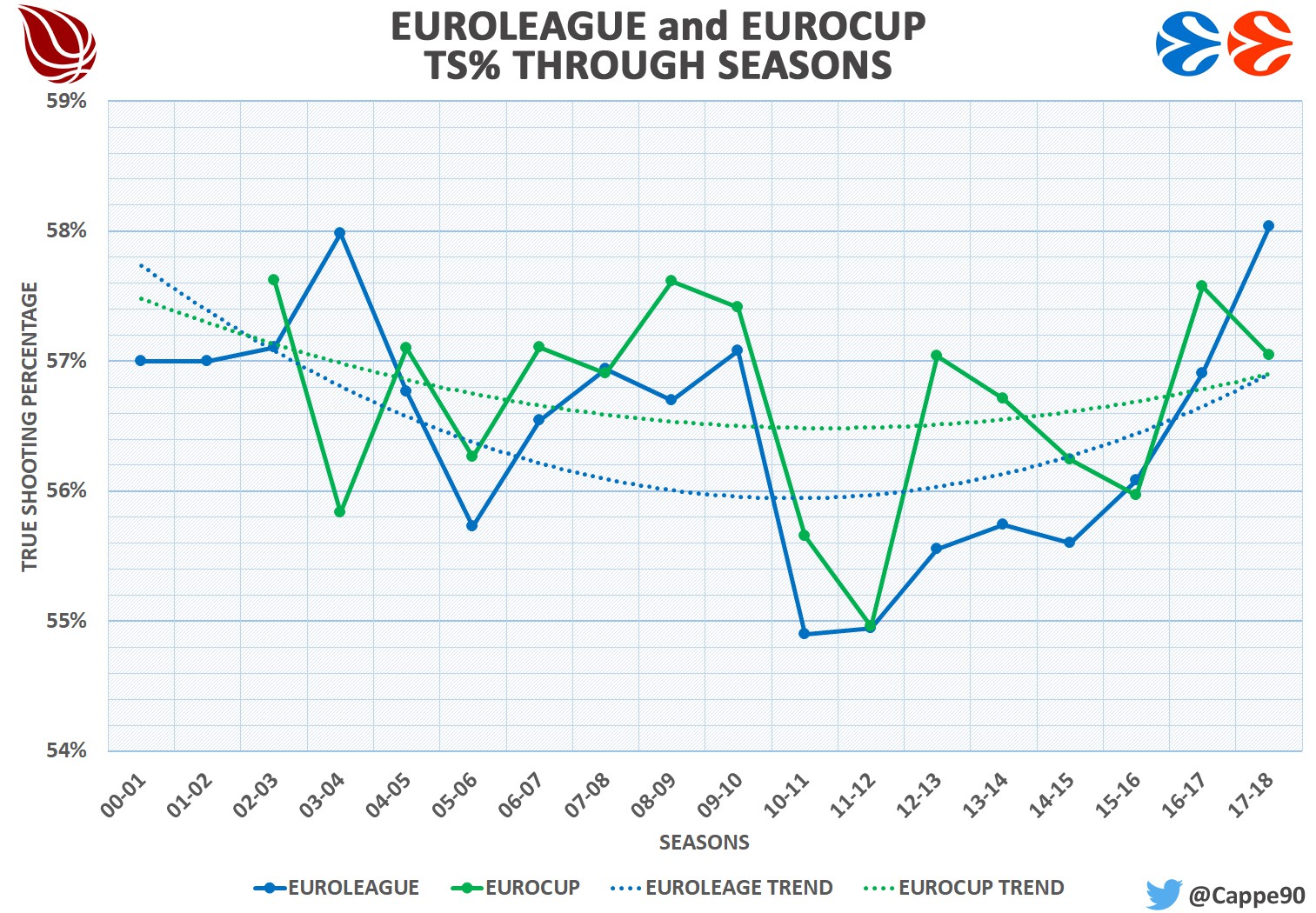 The trend of the chart is very similar to the previous ones: an initial decrease and a subsequent growth. Although the two leagues have averaged a very similar TS%, the Eurocup has slightly better values: however, everything varies in the order of 3-4%, so they can be defined as small differences (and so neglectable).

Therefore, the graph does not present a difference that could explain the diversity of the Rating graph. Let's analyze the turnovers: 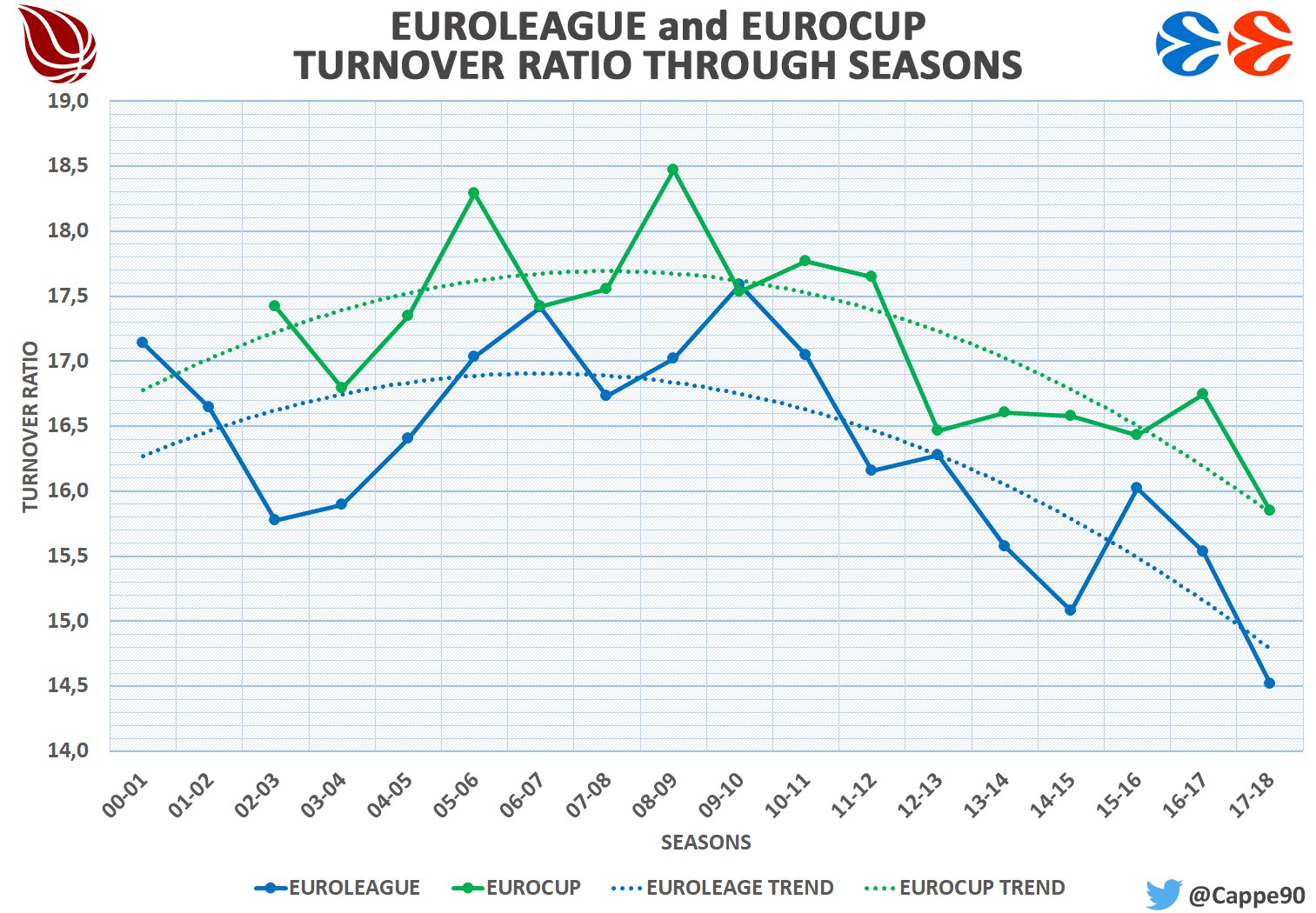 This chart shows one of the main reasons behind the difference in Pace and Rating. In Eurocup more balls are lost, which increase the Pace and decrease the average efficiency. Therefore, the turnovers are one of the main reasons behind the differences between the two leagues: they are often used as a measure for the overall quality, so it can be said that for Eurocup there is a tendency to have a lower quality than Euroleague, as it was reasonable to expect.

One last aspect of the game that has certainly influenced the two leagues is the offensive rebound: 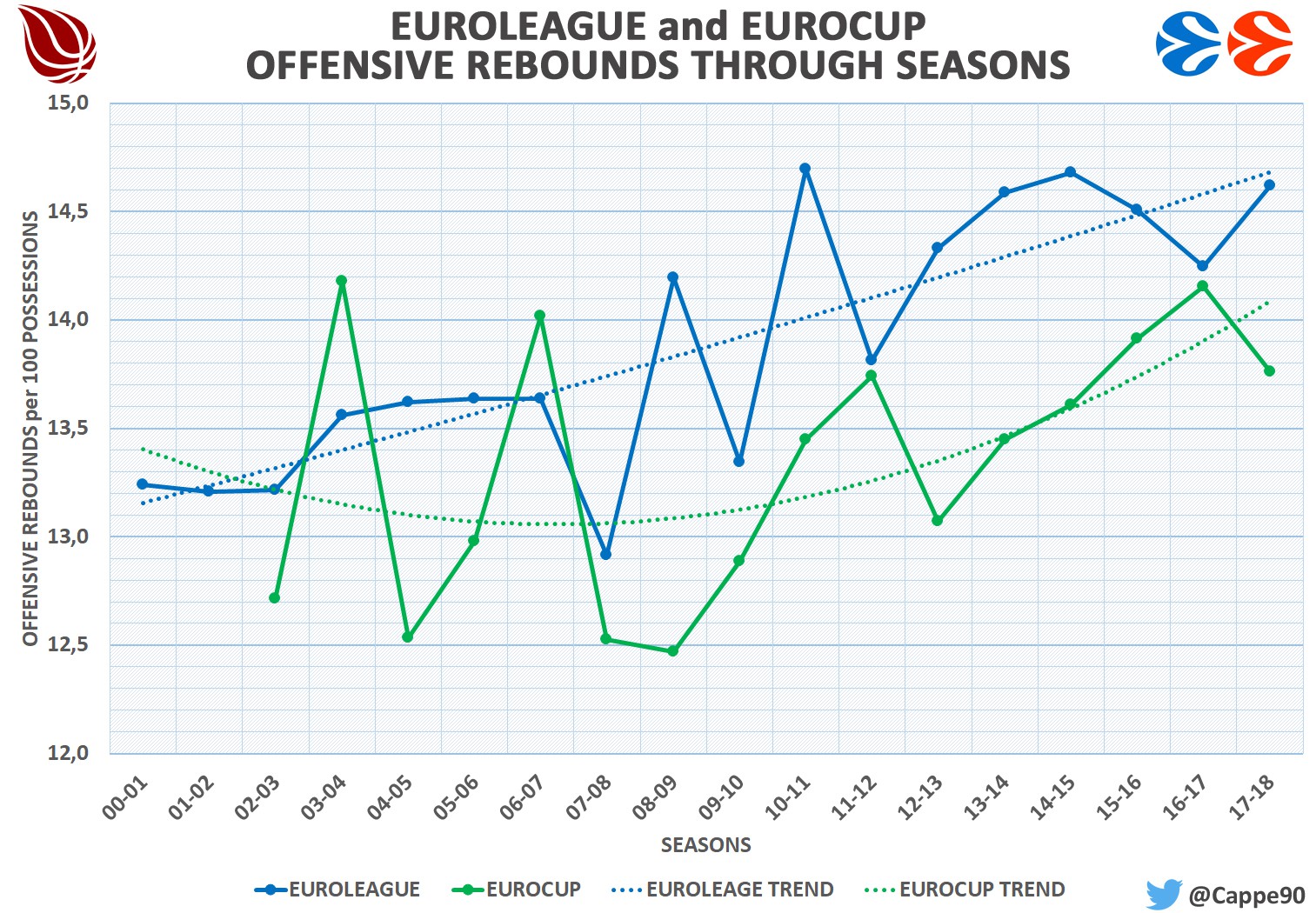 As I said in my first article, the offensive rebounds are also influenced by the players' disposition on the court: to analyze this fact we need to observe the two following graphs. 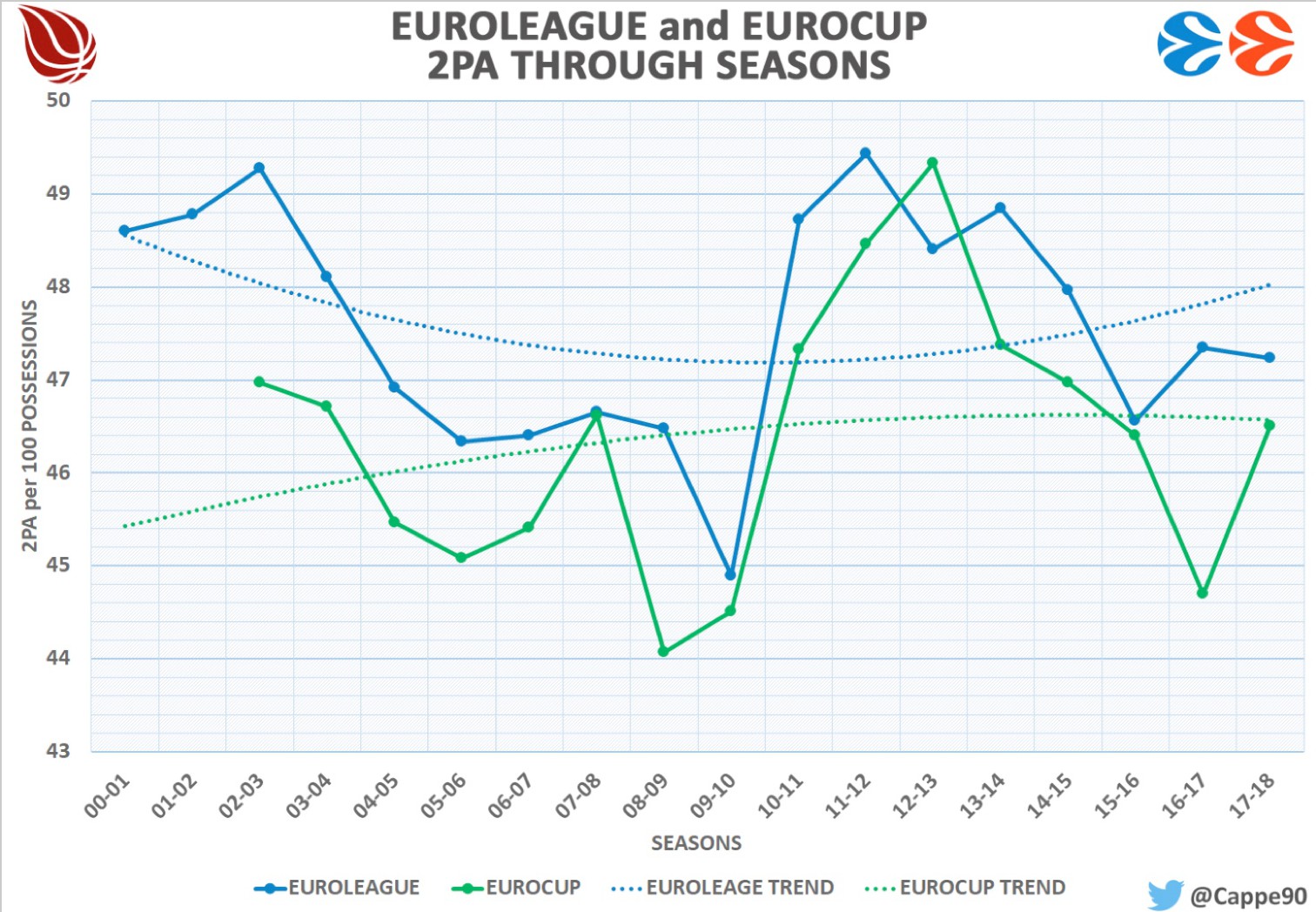 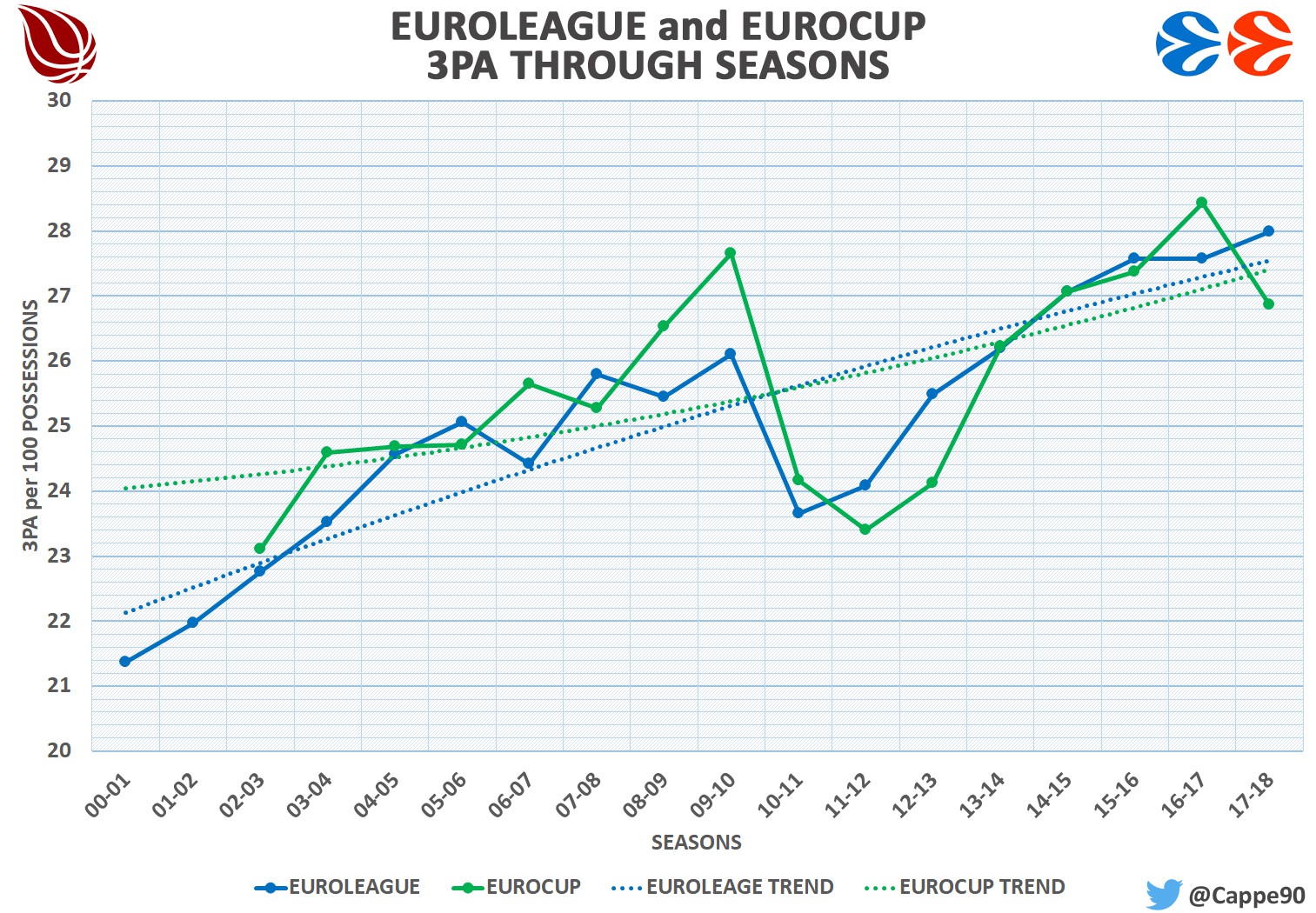 In this case, the differences between the two competitions are negligible: the only detail that varies is the trend of the 2-point shots. In the first competition of Europe, the last seasons are conditioned by a greater search of the shooting in the area, unlike the other, where the trend is the exact opposite.

In any case, the distribution of shooting is similar and consequently it is not possible to say with certainty that the different spacing has led to those differences in offensive rebounds. With good odds then the main factor that will have led to that distance is the lack in Eurocup of players with good abilities in offensive rebound.

Anyway, now we have enough data to understand everything: in Euroleague, the tendency is to play at a lower rate because of the higher number of offensive rebounds; that prolongs the duration of possession, thus reducing Pace. Adding the fewer turnovers, the picture is completed: in the first European competition, even if you shoot similarly to Eurocup, there is a better overall quality, which allows you to reach higher levels of play.

The opening round of the 7DAYS EuroCup Regular Season had some great performances, but no player shined brighter than UNICS Kazan forward Maurice Ndour